In the last weeks we have been working on 11 new Bricklets. Below you can find the layout of the panel that is used for the first Bricklet production. In a second production we will use one panel per Bricklet. 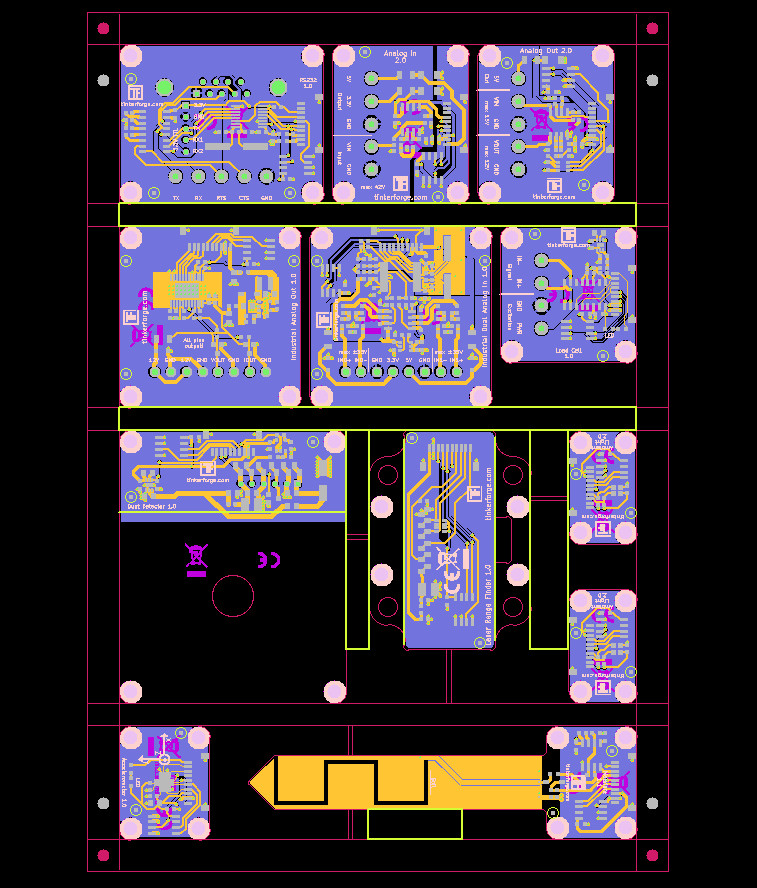 The new Bricklets are a Accelerometer Bricklet with 3-axis Accelerometer and a new Moisture Bricklet that uses a capacitive method to measure moisture (to avoid corrosion). The new Load Cell Bricklet can be used together with load cells to build custom scales. With the Laser Range Finder Bricklet it is possible to measure distances up to 40 meter with an accuracy of 1cm. The Bricklet can be used to measure a precise distance from a drone to the ground. Additionally we will offer a Industrial Dual Analog In Bricklet that is capable of measuring voltages very precisely. The new Analog In Bricklet on the other hand is a low-cost way to measure voltage. A new version of the Analog Out Bricklet will have the ability to create output voltages of up to 12V (instead of the maximum of 5V that the old Analog Out Bricklet could supply). An advanced version, the new Industrial Analog Out Bricklet is also available. It can produce 0-10V as well as 4-20mA output. Together with the Industrial Dual 0-20mA Bricklet it should now be possible to use all of the actors and sensors that are used in industry with 0-10V or 0-20mA interface. The Dust Detector Bricklet uses the Sharp GP2Y1010AU0F sensor. It measures the amount of dust that is present in the air. Another upgrade will be given to the Ambient Light Bricklet. The new version can measure illuminence much more precisely. With the RS232 Bricklet it is possible to talk to devices that use RS232 (for example to control a heating system).

An assortment of Bricklet prototypes that was available for a photo can be seen below:

The circuit boards for the mass production are currently in production, they will be ready in approximately 3-4 weeks. There will also be even more hardware in the near future. Stay tuned!